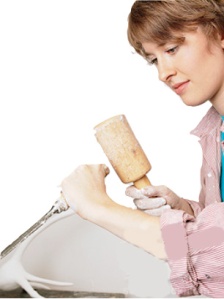 This myth suggests that we fashion our kids personalities and outcomes like a sculptor sculpts a statue. I suspect that theories in psychology that promulgated this myth were authored by men who weren’t around babies very much. I say this because even a casual exposure to newborns suggests that they are very different from one another (e.g., my three kids couldn’t be more different from each other before my wife and I had any opportunity to mess them up). We parents are more like shepherds. We guide our children, knowing that a significant portion of who they are, and what they will become, is heavily influenced by factors outside of our control, the largest of which is their temperament (i.e., genetically influenced personality characteristics).

I could take my family on a month long vacation to Rome if I had a dollar for every time I’ve had a parent, in my office, giving himself or herself a death sentence for a misdemeanor. We all screw up! It is inevitable! The thing to do is to try to be in the right fights, knowing that sometimes we’re going to get creamed. What are those fights? My intention is for my parenting book to articulate the top 10 of them (i.e., special time, rituals, competencies, self and relationship care, monitoring, discipline, collaborating with other adults, health habits, adaptive thinking and problem solving, and recognizing and responding to psychological symptoms), but you’ll see aspects of them described all throughout this blog.

Images come to mind of a parent getting up and getting a good breakfast in everyone’s stomach, while interacting pleasantly with all about the day ahead, then having a rewarding day doing meaningful work, perhaps mixing in time for exercise and socializing, then coming home and skillfully producing a family meal, appropriate supervision of homework, shared time with one’s spouse, and pleasant commutes to the children’s extracurricular engagements, then perhaps ending the day with some gentle recreation, shared reflections with one’s spouse, prayer and a warming bedtime routine with each child. Man, even writing that stresses me out. I can’t tell you for a fact that unicorns don’t exist but I sure as heck know I’ve never seen one (well, except for maybe one bad weekend in graduate school). Likewise, I’ve never seen this sort of work-life balance. But, I’ve seen lots of parents (especially women) torturing themselves, in their mind’s eye, for not realizing such.

I once asked a panel of experts on a television program I was hosting: “If it were

possible to raise a child to adulthood free of failure and injustice, would you do it?” Not one of them hesitated before stating, “No way!” They first argued that such an adult would be too vulnerable in this world. Moreover, crisis = pain + opportunity, with the dosing of opportunity usually being greater and, lasting much longer, than the pain. Failures and injustices are rich with learning, acting like, as one poet put it, dragons guarding treasure. I also speculate that the more a person is leading a high road life the more likely it is that that person will experience injustice (e.g., ever know of someone impactful in this world who didn’t experience significant injustice?). I don’t mean to suggest that everyone experiencing injustice is on a high road. I do mean to speculate that everyone on a high road experiences injustice, with the degree of such commensurate with her or his general effectiveness. As we want our children to lead self-actualized lives, they need to learn how to experience, think about, and benefit from failure and injustice.

#5. We can invest in our relationships after life’s obligations have been met.

This is another common one. I see it most when I ask people to make (not “find” but “make”) time for their relationships, including special time with each of their children. We’re inclined to use the verb “find” because we envision squeezing one-on-one time with family members in between the bricks of our obligations. But, in my experience, those obligations are more like a crack-free, icy, steel wall. We therefore end up treating our relationships like cacti instead of the orchids that they are, telling ourselves that next week will afford us more time. Then, when our relationships inevitably show symptoms (as any orchid treated like a cactus will), we misdirect our blame and lamentations. We do well to ask, “what important obligation will not get done this week so that I can make sure to attend to each of my family relationships one-on-one?”

If I were emperor of the universe I’d establish a salary cap in major league baseball and abolish the word “normal.” I hear this word in my practice all the time: “Is he (my child) normal?” “Am I normal?” “Is (behavior x) normal?” In this context normal is meant to mean “normative” which, by itself, is not a hurtful query. But, as we too often equate normative with adaptive, we run afoul. Divorce and being overweight are both normative, but no one argues that they are inherently adaptive, and no one says they are “normal.” Moreover, someone with a very high IQ of 120 isn’t normal and Stephen Strasberg’s capacity to throw a fastball is certainly not normal.

Want just one example of a chronic cultural problem with “normal?” We too often equate how common a sexual interest is with how adaptive it is. So, if Bob tends to be attracted to those things that most men are attracted to his sexuality is deemed adaptive and vice versa. However, I can tell you nothing about how adaptive someone’s sexuality is if all you tell me is how normative it is. What matters much more is how the person’s interests are expressed; the more they are expressed lovingly, and don’t hurt anyone, the more they are adaptive and vice versa.

I like the quote from Stephen King: “Monsters are real, and ghosts are real too. They

live inside us and sometimes they win.” Everyone is confronted with an internal battle. Show me someone who isn’t battling with himself or herself and I’ll show you someone who is in prison or homeless or in some other dire circumstance. For the rest of us, we battle. (So, from that perspective, all of us have some “abnormality” about us.) That there is a science for understanding such battles should be a source of comfort not stigma.

Finally, when a parents asks, “is he normal?” What he or she is really asking is, “is he an okay human being?” and that answer to that question is always “yes.”

In this blog it feels like I’ve been howling at the moon a little bit. I guess that’s because it’s Saturday following a long week and I needed to vent a little. Thank you, my fellow parent-lunatic, for indulging me with your attention 😉