A Chronic Health Problem in Teens: a Lack of Sleep

The National Sleep Foundation does an annual Sleep in America Poll. Their 2011 edition, which has the theme of “Communication Technology in the Bedroom” was just published. In this blog I’m going to summarize the findings as they regard teenagers, which the poll refers to as Generation Z’ers. 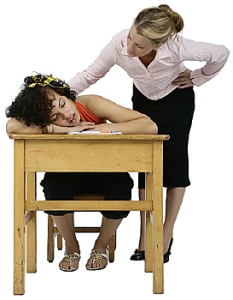 Almost three out of four teens report bringing their cell phones into their bedrooms at night, with 56% texting every night/almost every night in the hour before bedtime. This is concerning as those who text in this hour are less likely to say they got a good night’s sleep, less likely to wake up feeling rested, more likely to be characterized as sleepy the next day and more likely to drive drowsy.  Moreover, 28% percent of teens leave their cell phone ringers on at night and 18 percent report being awakened by incoming transmissions. Finally, when they wake up at night 35% of teens report that they will text.

The poll also found, as has been the case with previous editions of this survey, that our teens are not getting enough sleep.  This year 4 out of 10 teens reported getting less than the minimal recommended dose of sleep each night with 60% stating that they wake up feeling like they had not gotten enough sleep (46% indicated that they rarely/never get a good night’s sleep on weekdays and only 6% endorsed getting a good night’s sleep every school night).  Moreover, among those that drive, 40% indicated that they have driven drowsy.  In total 77% of teenagers reported having sleep problems at least a few nights/days a week (e.g., 34% of teens report taking more than 30 minutes to fall asleep at night).  Despite these problems teens seem to be aware of how many hours a night they need to be rested (i.e., 61% indicated that they need 8-9 hours, or more, to be rested).

The poll also asked the teens what areas are negatively affected the next day when they are tired. These are the areas they indicated become problematic (the percentage endorsing the problem is in parentheses): mood (87%), schoolwork (84%), family life or home responsibilities (73%), and social life or leisure activities (68%). (Please see my previous blog entry that reviews both the negative next-day consequences, for youth, of being deprived of just one hour of sleep as well as the National Sleep Foundation’s recommendations for how much sleep kids should get each night.)

√ More than three out of four teens use their laptops in their bedrooms in the hour before going to sleep. Most of the poor sleep outcomes that are associated with texting in this hour are also associated with this kind of activity.

√ Sixty percent of teens drink caffeinated beverages each day, with one out of four drinking four or more.

√One percent of teens report using an e-book reader in the hour before bedtime.

To review strategies for promoting a good night’s sleep in your child click here. For now the obvious thing to say is that we parents do well to be mindful of how much sleep our teens need as well as what the likely consequences will be if they are deprived of such.